For more than forty years, the Clarksburg-Harrison Public Library's home was an elegant antebellum mansion called Waldomore. The house was built in 1842 by local businessman Waldo P. Goff and his wife, Harriet Moore, from which it derived the name "Waldomore."

Waldomore is a neoclassical two story brick mansion with single story wings. It was constructed on four acres of land for Waldo Potter Goff and his wife Harriet in 1840-2. Waldo had an established career as a politician and business man (both as a merchant and later on in real estate). Together, Waldo and Harriet had nine children: four boys and five girls.

After Waldo's death in 1881, the house passed to Waldo's eldest surviving daughter May.  In the 1890s, May and her husband Richard Lowndes renovated the mansion enlarging and adding a second floor to the four wings of the house.

May Goff Lowndes died in 1930, gifting her home to the city of Clarksburg to be used as a library and museum. The name Waldomore was derived from Waldo and his wife Harriet's maiden name as a way for May to honor the memory of her parents.

To accommodate the library, the first and second floors were renovated to create large reading rooms. and the central stairs were shifted into the old pantry. On June 1, 1931, the library opened to patrons. In 1975, the library was constructed on the site of the Ritz Theatre.

Today, the building is used as a genealogical research library, local history archive, and museum associated with the Clarksburg-Harrison Public Library.

Visitors and researchers are welcome to visit the Research Room on the second floor of Waldomore.  Hours of operation are:

If you have a specific research need, we recommend calling ahead to make an appointment for a librarian to assist you.

The second floor of Waldomore houses the library’s research collections. The most notable of these is the Local History and Genealogy Collection which features materials focused on the region of North Central West Virginia, Harrison County, and Clarksburg.  The genealogical materials include records and information for the eastern panhandle, Virginia, Maryland, Pennsylvania, and New Jersey.

The local history collection contains a variety of materials such as cookbooks, church histories, high school yearbooks, cemetery listings, obituaries, local authors, and much more. All of the materials in this collection can be found using the library catalog, just look for the call number beginning with the phrase WALDOMORE or ARCHIVES.

Many of the genealogical materials in this collection have been provided through the generous support of the Harrison County Genealogical Society.

Along with the Local History & Genealogy Collection, Waldomore is also home to the archives of the Clarksburg-Harrison Public Library. The Archives are composed of collections of rare and unique materials that have been gathered since 1931. They contain a variety of materials including photographs, portraits, diaries, letters, posters, maps, handouts, and artifacts highlighting the history and culture of North Central West Virginia. Due to fragile nature of the materials, access is limited to appointment only.

The most prominent collection in the Waldomore Archives is the Gray Barker (UFO) Collection. Gray Barker was a noted writer, hoaxer, and teller of tall tales . He was active in the UFO community from the early 1950’s until his death in 1984. Barker was born in Braxton County, but called Clarksburg home for much of his career. To learn more, please visit the Gray Barker UFO Collection page. 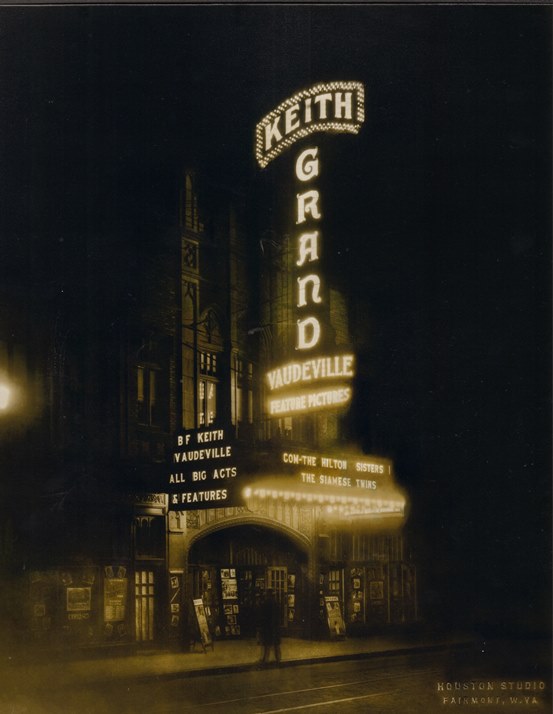 With the reopening of the Robinson Grand Theater in downtown Clarksburg, take a moment to enjoy this exhibit on the history of the building.

Click on the title above or the image to open the exhibit. Click on various elements to learn more or use the arrows located on the bottom of the screen to navigate through the exhibit.